Agatha Emily Walden, known by her classmates as Aggie, is a student in the Paris boarding school and a friend of Madeline in the 1998 film.

The film Madeline is set in 1956. Aggie appears in the film as Madeline's best friend and confident, who, in contrast to Vicki and a few others, is more sympathetic towards Madeline, even going so far as to heeding her friend's requests to look after herself as Madeline runs away for the circus, having nothing to lose after the death of her parents and thinking that it's all her fault that the school is closing and Aggie holds onto Madeline's hat when she runs away. 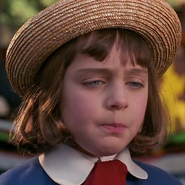 Aggie Walden
Add a photo to this gallery

This article is a stub. You can help Madeline Wiki by expanding it.

Retrieved from "https://madeline.fandom.com/wiki/Aggie_Walden?oldid=9181"
Community content is available under CC-BY-SA unless otherwise noted.